As NBN continues to grow with nearly 6.6 million premises ready for connection the competitors are marching in.

The latest is the launch of the blisteringly fast 5G mobile network. This will take a decade to install but many may get an early entry

Telstra is adamant it will not kill the wires-in-ground $84 billion National Broadband Network. 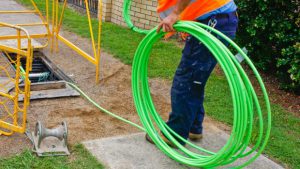 Telstra is embracing 5G technology after launching a trial hotspot area on the Gold Coast.

They also are announcing plans to begin offering some 5G services by next year.

Reportedly the technology has been touted as a potential NBN-killer, even by the outgoing NBN Co chief executive Bill Morrow.

This is because of its touted  20-gigabits-per-second speed.

Mr Riley, who now heads Telstra’s enterprise division, said substantially more data was consumed on the fixed network than on the mobile network.

“I think 5G will increase the number of wireless-only homes and businesses but I don’t think it could replace (the fixed network),” he said.

He said some of the earliest adopters of 5G technology were Australia’s miners, who were implementing it in autonomous vehicles.

5G as a backup or roaming devise will be in every pocket and business.

The regional areas that most need it will probably be the last to be upgraded so there is a long wait for many.

The changes to our Internet in such a short time are making life easier and more accessible to many as we adapt to a higher speed environment.