Do NBN carriers overload the channels so you end up with
slower speeds? Your NBN congestion answered.

Many suppliers are starting to wish they had controlled channel stuffing in the past as ACCC looks into charging the number One Carrier Telstra plus Optus and certain to follow with many others.

The charges evidently relate to the promise of an achievable speed that could not be, or might not be available to consumers

It has long been a problem with ADSL when in Peak periods your speed slows to a crawl because of congestion.

To think the NBN might be different was really hoping for something that was realistically improbable.

To be clear the NBN contains three specific areas, upload and download speed which are linked and the volume of data or what you use.

The critical complaint generally is around download speed so we will consider that as the core component of this review.

You have a Toll road or Highway to suburban road and each will only take so much traffic when you reach capacity things slow down.

No difference here.
You’re trying to push broadband Fibre capacity down copper and into local wiring, nothing could go wrong, or could it?

Who found out first?

Those out of the fixed network and relying on Satellite found this out very early on. The first adopters got great speeds and were very happy and praised the network for a glorious result. As time passes and more connect on the same channel the speed results diminish and users become less enthusiastic.

It is still better than the old system so they live with it.

Where are we happy?

Most of us at home are happy with speeds of anything over the 8 MBPS generally achieved over ADSL. Many have been well below this for a lifetime so the extra gain is a bonus. Given a regular 12 MBPS would be a godsend.

Then we step up to somewhere between the 12 and 25 MBPS ( ignoring 50 and 100 for the moment) result and experience a whole new world.

The problem was the early sales approach was to sell at the maximum result and expect the people to be happy with something less. Worked before why would it not again?

We can all do speed tests now, simply log in and type speed test and away you go. Only 23.5 MBPS and you promised me 25 what are you going to do about it?

As we move to the NBN other problems will diminish your capacity and chew up the bandwidth.

In the olden days, pre-NBN, data was shared with your voice line. Now post NBN voice is shared with the data capacity and it reduces the channel capacity.

So when you are only achieving a low rate of Data it may be in part the fault of Voice.

The ACCC presumes the carriers load the channels to save money and this is the primary cause of the problem, Nothing wrong with the NBN move on nothing to see here.

With the structure of the redesigned Broadband network, we must live with a variety of connection methods. ( forgetting Backhaul and other techie bits)

Distance is a problem.

Because Fibre does not arrive at your premises, rather to a Node or the curb you have a distance problem. As an example, if the Node is within a distance of 400 meters 100 MBPS is arguably available but take that to 800 meters and the very best available would be 50 MBPS.

Distance is a problem and until you get Fibre to the door it always will be.

We have not yet considered internal situations, your cabling, your modem even your computer as a factor to inhibit speed.

The basic NBN system is capable of delivering a usable speed of up to 100 MBPS over Fibre.

You will always have a problem with any copper connection. 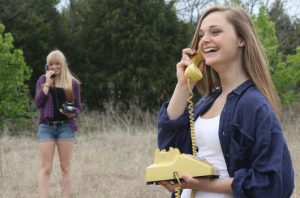 Your voice traffic will take preference to data
Plus problems with Internal cabling and hardware.

So how did the marketing Gurus get it so wrong?

Telephone carriers both fixed and mobile have long been pursued over false and misleading promises and the need to get it right. They have to lay out every charge in the Terms and conditions and even tell you how much you will spend during the life of a contract.

They have known over many years the vagaries of speed with ADSL and that it was only a best available solution.

Did they just take the early NBN model as the ground rules and forget to change with NBN 2.

The carriers give in.

Telstra and Optus have rolled over and are offering to compensate the early users and as I stated before others will follow suit.

They may have learnt their lesson now but were they really that careless before.

More importantly, have they changed? I think not.

Just this week I called a carrier to be advised that I would certainly achieve the speed I wanted and that was a sales guy somewhere in a call centre and coming from a very reliable company.

I work with a carrier that recognizes the problem and confronts the issue upfront. You want to pay less to achieve less that’s fine, you want middle ground that is better you want maximum it comes at a cost.

That is spread across all the speeds of 12, 25, 50 or 100 MBPS. The offer is still based on best effort and only on what they control, channel congestion.

This is also the fundamental premise of the NBN being a user pays basis but only on what is possible.

You cannot manage the input limitations that exist you can only live within the confines of your location.

If you demand speeds above this there are other ways to achieve it naturally at a cost.

A model for the masses.

The NBN is a model for the masses and designed to achieve a move away from a failing copper network. Maintenance would have driven prices to a new level trying to band-aid the network.

The NBN is, however, driving prices down with new opportunities and generally delivering above average internet speeds with a bonus of consumer choice.

Telephone call bills have come down by massive amounts compared to the original fixed line charges so we are achieving real gains in both speed and cost.

When you are buying NBN services ask the questions and use a common sense approach. If it is cheap there is probably a reason.

The carriers can tell you most of the input components to make your own value judgment.

If you are half a Kl from a node you will not achieve top speed.

Every Voice channel will eat up nearly one megabit second so take that into consideration.

Hardware is also critical so your $50 modem might not achieve what a more expensive one can.

As for carrier congestion, we can only rely on the arbitrators to keep the bastards honest.